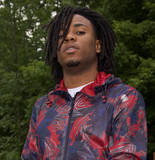 Charlie Trevale Koonce more commonly known as “Charleito” is an American rapper born in Marion, Indiana. By the age of 15 Charleito was recording his own singles and mixtapes ; launching recognition throughout his high school and hometown. This was followed by a spill of homemade music videos including his first official release “Talk To You Later”. By the age of 21 Charleito had released 2 full length projects “I Told You Too” and a collaborative project titled “LeitoLuney”. By the end of 2017 Charleito released multiple singles via soundcloud including “My Position”produced by CashMoneyAP ; which itselfs hold over 1.5 Million streams. Following this local success Charleito released another full length project titled “Samurai Kent” and since has began performing in multiple venues throughout Indiana. Throughout this time the rapper’s library has been noted by all major streaming platforms. The latest of his catalog of music is titled “On My Way” which is another single of his; produced by Ke.On.The.Track.