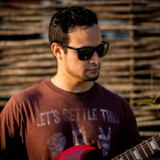 Jav Cast is a Chillhop/Jazzhop producer based in Mexico. As a guitarist and composer, he writes chill and groovie instrumental music.   His introduction to music was at the age of 15, starting as hardcore Metal fan; Javier a.k.a Jav Cast developed a strong bond for the guitar, since those genres are heavily relying on this instrument. The guitar play on bands such as Iron Maiden, Metallica and Avenged Sevenfold, among others, were an amusement to him. Three years in the future and Jav Cast started his music and producing career attending a college called Fermatta in the city of Guadalajara, Mexico, getting his Bachelor of Arts degree on the year 2016.   Jav Cast as a project was born on the year 2019 by the influences of artists such as L´indecis, Pandrezz and Kupla, and with just a couple years of trajectory, Jav Cast has already managed to collaborate with incredible artists in the scene… Including; Pointy Features, Nogymx, Ningen, Loafy Building and many more.   Hope you find a chill stay listening to his music. IG: @javcastmusic. Come and say hi.