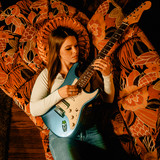 Shannon Lauren Callihan brings a new spin to neo-soul. Nashville-based R&B/soul singer-songwriter Shannon Lauren Callihan has found a way to bring classic sounds to a new audience. Finding inspiration across the spectrum, from Tom Misch and Anita Baker, Callihan fuses infectious pop melodies with improvised jazz instrumentals to create a sound all her own. Originally from a small town in Kentucky, the 2016 move to Nashville pushed Callihan to hone in on her songwriting and instrumental abilities. The release of her first single “What You Do to Me” in 2019 was the culmination of years spent building a fanbase on Instagram around her guitar playing and finding her sound within the Music City scene. Callihan has seen famous stages including Red Rocks while playing lead guitar for Rozzi on the O.A.R. and American Authors tour in 2019. She recently signed with Marshall Live Agency and has shows planned for later 2021 with dates to be announced. The momentum has continued with editorial play-listing from Spotify on their “Nu-Funk” and “Ready for the Day” playlists. Callihan is signaling the start of a new era with the bittersweet "Used to Be My Love," her new single slated to drop on August 6, 2021. When looking to the future she says, “It’s taken me a while to get where I am, but I just had to connect all the dots. I’ve done so much as an independent artist, and I feel confident in who I am. Now it’s all about putting out good shit and building that fan base.”