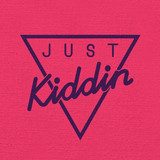 Hailing from the small market town of Kettering, Northamptonshire, childhood friends Lewis and Laurie place no limitations on their sound as DJ and producer duo Just Kiddin. Drawing on their experiences as musicians - Laurie playing the drums, and Lewis playing guitar. Together they have created a unique production recipe - gaining props from industry heavy weights such as Duke Dumont, The Magician, Gorgon City, Martin Garrix and Tiesto. Coming from musical and DJ backgrounds, their club performances have also brought rapturous acclaim. Just Kiddin are a welcomed breath of fresh air behind the booth, bringing charisma, energy and faultless tune selection at any given time of the night. Just Kiddin first made it onto the scene with their bona fide summer anthem “Thinking About It” via Parlophone’s dance imprint FFRR. It was a huge success, receiving over 50 plays across BBC Radio 1 &amp; 1Xtra and over 8 Million streams online. Since then, JK have gone on to achieve over 16 million plays on Spotify alone. Their string of releases (including “Getaway”, “Only for You”, “Fall for You”, “Won’t Let You Down” &amp; “More To Life”) have been supported by tastemakers Annie Mac, Danny Howard, &amp; Pete Tong. Working with Labels such as Columbia, Spinnin, Potion, Kitsune, Sweat It Out &amp; Ministry Of Sound the duo have reached international success with airplay all over the world. Having recently signed a long-term deal with Sony the infectious duo have a scorching future ahead of them.