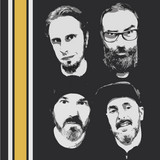 "Don't think about what you have to sound like. Listen to lots of good music, share it with the rest of the band and just play what comes from the inside". After several years running into each other at the underground music scene of Cantabria, the band 's lineup has been consolidated with Iván Valle (Odysey, Sangre Fría, Deliverance...) on vocals, Juanma Pinto (King Size Co., Deliverance...) on guitars, Carlos Gutiérrez (Menhai, Highlanders...) on bass guitars and Julio Salces (Deliverance, Haven...) on drums, mixing the musical tendencies of each one to create something unique. The Soulbane's debut album ('The Amazing Acrobat Blindman') was a nine tracks journey through

the sound bet of the band. It was recorded at "La Miña Producciones studios" with the production of Natxo Liberty and José Lastra, and the collaboration of Luis Quesada on guitars The next natural step was to play the album live, but the composition of the song 'Garden of Bones' (2012) for the album-book homage to the master Jose Manuel Illera, opened a new time of compositional fever, adding new songs to the live show´s repertoire These songs will be part of the second album of the band 'Psycho Radio',