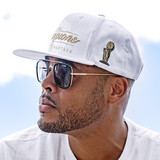 D.O. Gibson has defied the odds as a rapper from Canada, becoming a certified international artist, a successful record label executive and a socially active community ambassador.

He set a Guinness World Record when he freestyled for nearly nine hours in 2003, sold tens of thousands of CDs, hit #1 on U.S. College Hip Hop Radio charts and travelled the world performing for sold out crowds; D.O.’s success is defined in his own terms. In between recording, Gibson founded the Stay Driven program that launched in 2001.