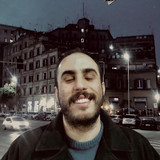 Born in 1992 in Istanbul, composer Avedis Ozdemir started learning the piano in his childhood years. His growing interest in music led him to be a self-taught musician, learning other instruments and composing his first music in the following years. While studying Econometrics in Istanbul University, he began his career as a church organist, where he later became conductor of the choir. Growing up in an Armenian community, his admiration for Gomidas led him to study the theory and history of music as a personal project. Thus, his acquaintance with Armenian traditional music is notable and can be heard in his several composings. He gave solo performances in cities such as Istanbul and Milano. Avedis got his graduate degree in ITU- MIAM, Centre for Advanced Studies in Music, where he studied music theory and sound engineering. There he recorded his first album "Kharn" in 2019. In this debut album he explores his relationship with his hometown Istanbul, introducing us to the neighbourhoods he grew up in. To do that he built his own instrument

‘Avedimba’ out of PVC pipes which can be heard at the third composition of the album ‘Beyazıt’. He was the vocalist of an afro-jazz band "Deli Bakkal", before moving to Rome to carry on his music studies. Now he studies in Sapienza University of Rome, where he also took part as a guest conductor for the blues choir. In addition to his compositions, he continues to create music for short movies, documentaries and mobile games.