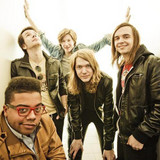 Sing It Loud's peppy mix of emo and alternative pop/rock is created by vocalist Pat Brown, bassist Nate Flynn, keyboardist Ben Peterson, guitarist Kieren Smith, and drummer Chris Lee. The Minneapolis natives formed the band in 2007 and after only a few shows together, they were offered a deal with Epitaph Records. They also began recording a self-titled EP with Motion City Soundtrack's Josh Cain, which was released in early 2008. Sing It Loud's debut album, Come Around, followed several months later. After spending the summer of 2009 as part of the Warped Tour, the band headed back to the studio to record a second album. The more thoughtful and mature-sounding Everything Collide was released in May of 2010. ~ Andrew Leahey, Rovi