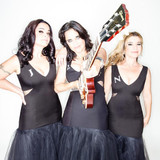 Three school- teachers walk into a bar, onto the stage, plug in instruments and then melt your face. No Small Children is an all-girl band, or as they call themselves, a band. They were born on the playground in the spring of 2012. Elementary school-teachers by day, guitarist and singer Lisa Pimentel and drummer Nicola Berlinsky decided to start the band while covering recess duty. Three months later they had an EP, countless shows behind them and an east coast tour booked. By October 2013, bass player and singer Joanie Pimentel had moved to Los Angeles to join the group. With all three teaching at the same school, lunch breaks became band meetings, after-school times became rehearsals and holidays were reserved for touring. NSC’s animated, edgy and break-neck live show both invites you in &amp; calls you out all while you sing along to the fresh, yet familiar, refrains of their carefully constructed songs. Their glamorous matching dresses and bona fide command of the stage will have you leaving at the end of the night a little hoarse, with a smile, and a warm fuzzy feeling. These ladies eat, live and breathe music and you can feel it in their songs. They create it, perform it, and then pass their love of it onto the next generation of music lovers. Soon to be playing at a big theatre near you. Featured in: 2016 Ghostbusters film Santa Clarita Diet Season 1 Santa Clarita Diet Season 2 Lisa Pimentel - Guitar &amp; Vocals Joanie Pimentel - Bass &amp; Vocals Nicola Berlinsky - Drums