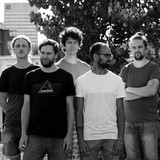 Sky Architect is a young Rotterdam-based band. You might be inclined to say they play progressive rock music, but they’d prefer you to just listen to their music free of such limitations. As certified architects, they have the technical proficiency to pull off everything they want to perfection, to draw out a flawless design and lay down a firm foundation. Then, instead of filling it in, they keep to the skeletal set-up and let the weather – be it rain, wind or sunshine – rush through it. However hefty the subject tackled, however heavy the sound, the ‘sky’ always maintains a feel of playfulness, an airy breeze keeping things fresh and unexpected. Since the forming in 2008, 3 albums ( Excavations of the Minds (2010), A Dying Man's Hymn(2011), A Billion Years of Solitude(2013)) were released to critical acclaim.. Nomad (2016), their fourth effort, marks a new era. The bands versatility is confirmed by tracing the other projects of the band members, which run the gambit from jazz to folk and from pop to metal. shared the stage with luminaries such as Dream Theater, Riverside, The Tangent and Agents Of Mercy. Sky Architect is: Vocals, guitars // Tom Luchies (Mayra Orchestra, a silent sound) Keyboards, horns // Rik van Honk (Mayra Orchestra) Guitars // Wabe Wieringa (Adeia) Bass // Guus van Mierlo (Fake Billy & the False Prophets) Drums, percussion // Christiaan Bruin (Inventions, The Black Codex, Mayra Orchestra, Nine Stones Close)