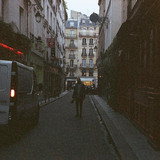 Brooklyn Resident, Nathan C Broaddus is best known for his down-tempo electronic project, Evenings. The project seemingly born out of thin air, began to surface on underground music publications in 2010. After releasing his first EP, North Dorm, Broaddus moved to France in 2011, and upon return offered a full length album entitled Lately. The two releases were merged, remastered, and rereleased to a much larger audience in 2013 as a 14 track LP, Yore. The project has toured the US, Europe, and Australia. Evenings’ recordings are warm, intricate, and evocative. Broaddus' work and style has evolved over the years to encompass a mix of lo-fi, psych, ambient, shoegaze, down-tempo, house, and acid. While also working under the moniker Nathan Calhoun; Broaddus offers darker, more experimental pieces, rich in sound design. Known to often give away music, Gardener (2014), Src (2017), and the originally vinyl-only Angel 2 (2019) were released without any promotion. ☂️ Yore on Vinyl https://evenings.bandcamp.com/album/yore-2 🕊 Angel 2 on Vinyl https://evenings.bandcamp.com/album/angel-2