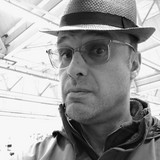 Classically trained in piano and euphonium, Ken became interested in music technology during the Acid House revolution and acquired his first sampler in 1989.

During the 1990s he played keyboards in funk and soul bands in Basingstoke and Bristol, before emerging as a solo artist and producer early in the 21st century. Described as 'jazz-inflected ambient electronica' Ken's first commercial release was a contribution to The Abduction of the Art of Noise compilation CD in 2004.