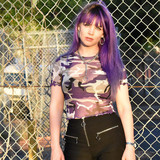 Fresh Violet is a break out rapper and producer from Melbourne, Australia. Her lyrical prowess and slick production have been turning heads all around the country. Fresh spent many years sharpening her skills before releasing her explosive debut EP 'ACKBARS' last year. All 6 tracks received airplay across the country including spins on Triple J for 'Headline Level' and 'No Sheep'. Fresh has been referred to as "One of the most promising voices in Aus Hip Hop" by Beat Mag, "One of the most entertaining emcee's on the come-up" by All Aussie Hip Hop and "One of the best in the underground right now" by Triple J. Fresh is well known and loved for her live shows which she has been touring around Australia. Her versatility, raw power and off-the-wall persona that shines through in her performances and has solidified her as a titan among her peers and keeps her in high demand all over the country. Violet followed up ACKBARS with her LP ‘50 Shades of Violet’. The project is a diverse tapestry of styles which delve far deeper into Violet’s psyche and experiences than any preceding release. The different "Shades" explore a broad palette of sub-genres genres and moods culminating into an intensely creative, yet cohesive debut album. ‘50 Shades of Violet’ has received praise from Triple J, MTV, Earmilk, Flavour Mag and many more. Violet has recently returned from a huge national tour with Butterfingers and is preparing to release a new EP in collaboration with Card Houses this month.