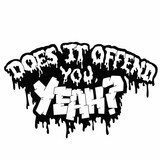 Does It Offend You, Yeah?

Featuring Does It Offend You, Yeah?

An electronic-based rock band from Reading and London, Does It Offend You, Yeah? made a mark with their raucous live shows and high-energy music that drew comparisons to !!!, LCD Soundsystem, and Digitalism. The band signed to Virgin and released its first album, You Have No Idea What You're Getting Yourself Into, in 2008. (The album included a free digital download for the Live @ the Fez EP.) Members Rob Bloomfield (drums), Dan Coop (synth), Morgan Quaintance (vocals, synth, guitar), and James Rushent (bass) took their show on the road in early 2008, supporting the Cribs on the NME Awards Tour. Quaintance left one year later, replaced by Matty Derham (Fields) and Chloe Duveaux (Elle Milano). The band's second album, Don't Say We Didn't Warn You, appeared in early 2011, heralded by the single "The Monkeys Are Coming." ~ Chris True