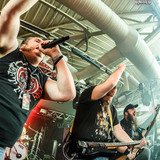 Spawned from an area that has Heavy Metal running right through it’s veins, Left For Red were born in 2010 in the West Midlands, and were nourished by the records of Black Sabbath and Judas Priest. Left For Red consists of LC Decoy (Vocals), Aaron Foy (Guitar), Philip Smith (Guitar), Daniel Carter (Bass) and Rob Hadley (Drums), the five piece began to expand upon their earlier influences and soon immersed themselves into the likes of Devin Townsend, Tool and Deftones before arriving at their very own blend of modern heavy metal. Look out for the raucous metal heads when they bring the party to your town! Highlights • ‘Kneel Before You Die’ was broadcasted in 27 countries around the world TNA Impact • 10,000 collective views on YouTube • Appeared on the New Blood Stage at Bloodstock Open Air 2015 • Performed an acoustic set on the Amstel Stage at the Genting Arena prior to Metallica • Opened for Skindred and The King Blues at the Wulfrun Hall, Wolverhampton. • Performed at HRH Metal 2017 • Performed at Hammerfest 2017 • Have been seen supporting Chimaira, Crowbar, Evil Scarecrow, Sacred Mother Tongue, Diamond Head, Breed 77, Sylosis, Heart Of A Coward, Raging Speedhorn, Voodoo Six and many more.