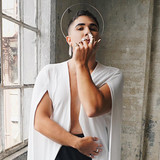 Connecticut based queer pop singer-songwriter Akira AK (or also commonly known as simply “Akira”) is best known for his booming voice, catchy melodies, and command of emotion in his songwriting. Drawing from artists he admires, he creates his own unique perspective on life, love, and overall relationships, with a sound akin to the likes of Lady Gaga, Fun., Sia, Rina Sawayama, and more. With two EP releases (“Autotune + Heart” and “Pearl”) under his belt, he has made himself known primarily for his attention to detail in his productions, as well as his emotive songwriting.   While writing songs since 2011, he began the formal work of putting out a professional release in 2016 with his debut EP "Autotune + Heart", and then the follow up EP "Pearl" in 2020. What makes Akira AK’s songwriting unique is his blend of personal experience and perspectives, with the ideas, themes, and characterizations drawn on from nerdy media (such as cartoons, comics, anime, etc.). This unorthodox blend of inspirations has garnered critical acclaim from music blogs noting his work as a “passionate portrayal of lyrics” and an “impressive pop masterpiece”.   Akira AK has established himself as a unique and well-rounded artist: both with a fine eye (and ear) for detail, as well as a strong connection and commitment to the LGBT+ community. He is currently working on new newest EP and looks forward to releasing it in the near future - sharing his new sound and ideas with everyone.