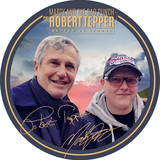 Marty And The Bad Punch

Featuring Marty And The Bad Punch

Marty Punch returns after his successful debut album „Moon Over Baskerville“, which was awarded with four awards at the German Rock & Pop Awards in 2015. The brilliant follow-up double album is called „Marty And The Bad Punch – Walk A Straight Line“ (EnghardtMedia) and will be released in 2019. Also featured on the new album is frontman & singer David Cagle US (JK Northrup / David Cagle „That’s Gonna Leave A Mark“, MelodicRock Records). The first single release is called „Zakopane“. It’s about a place and an unforgettable encounter that should remain in Marty’s heart forever. The single will be released digitally on all download and streaming sites worldwide and already shows the many facets and love from Marty for Melodic Rock. Highlight of the single is the legendary guitarist Tommy Denander SE, one of many guests of the album. „Walk A Straight Line“ is a time travel through the most beautiful time of Melodic & AOR Rock. In addition to beautiful ballads you can also find incredible AOR Rock songs and country anthems! Many international stars such as David Cagle US, Sarah Straub GER, Robert Karasek GER, Martin Motnik US, Carsten Enghardt GER, JK Northrup US, Tommy Denander SE, Frank Panè GER and Bruce Kulick US can be heard on „Walk A Straight Line“ , Recording and Mix Carsten Enghardt, and the final touches were given to the album by mastering engineer Dennis Ward US.