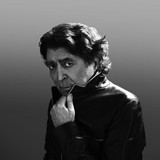 Singer and songwriter Joaquín Sabina was born in Úbeda, Spain, in February 12, 1949. At the age of 14, he started writing poems, connecting with music as a member of a teenage rockabilly band called Merry Youngs. Sabina's poetry and music skills were extended to acting while being part of Juan Panadero's theatrical company. In 1976, his book Memorias del Exilio was published and its lyrics were Sabina's inspiration to record his first album in 1978. El Inventario was followed by Malas Compañias, his first album for CBS. While the artist's popularity as a songwriter was growing, Sabina's lyrics started being requested by well-known Hispanic singers. In 1985, Sabina left CBS, signing to Ariola. Joaquín Sabina y Viceversa was recorded live during two successful shows performed at Salamanca Theater on February 14 and 15, 1986. The following studio record came out in 1987. Hotel, Dulce Hotel sold over 400,000 copies. In 1992, Sabina went on tour, performing almost 200 shows around the world. In 1997, the artist was recognized as the Best Spanish Rock and Pop Songwriter by the Spanish Songwriters Association (SGAE). Nos Sobran los Motivos followed three years later. In 2001 Sabina suffered a stroke yet returned to the studio within a year to record 2002's Dímelo en la Calle. The album Alivio de Luto arrived in 2005 and two years later -- after a successful world tour with Spanish singer Joan Manuel Serrat -- the live album Dos Pájaros de un Tiro was released. Sabina returned in 2009 with Vinagre y Rosas, backed by the young duo Pereza, who helped give the album some musical punch. Sabina teamed up once again with Serrat for the release of 2012's La Orquesta del Titanic and followed it with Live at Luna Park. Sabina's partnership with Serrat was the subject of the documentary film Simbolo y el Cuate by director Francesc Relea that included appearances from writer Eduardo Galeano, musician Javier Limon, and dozens of others. The 16-song soundtrack of the same title topped the Spanish charts; the film was a smash throughout Europe. Sabina went on another tour which took him as far as Mexico City and the Royal Albert Hall in London. It resulted in the live offering 500 Noches para una Crisis: En Directo in 2015; his final album for Sony. But Sabina wasn't done. Two years later, he revealed he was still at the top of his game commercially and creatively. In March he released the album Lo Niego Todo on the S&L label; it entered the Spanish charts at number one and remained there for ten weeks, drawing rave reviews from critics in the process. Of his 26-date tour throughout the region, the first 11 shows sold out in minutes. ~ Drago Bonacich, Rovi