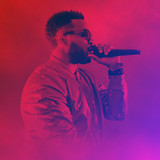 For KeeM hip-hop is more than music; it is a message and a mission. Native Detroit rapper/filmmaker known as KEEM THE FRANCHIZE started writing raps at a young age. His passion for music and film took him to Eastern Michigan University. After graduation, KeeM’s journey moved him to Houston where he would experience one of the biggest challenges of his life: stage 3 cancer. As a cancer survivor, Keem’s music features a layered lyrical depth ideal for the visual storytelling of film, and his upcoming project is aptly called “KeemoTherapy,”. Streaming now is his debut album, "Arena Ready”.