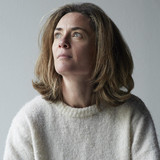 Dos Floris, real name Florence Donovan, is a singer songwriter and producer who creates melancholy music with attitude that somehow manages to be uplifting & warm at the same time. °° Her debut album "The Widowed Earth" was released to underground aclaim in 2017

and after touring the album she her was given a "one to watch" accolade & was selected as one of three UK artists to represent the UK at European Festival Linecheck in Milan, 2018. °° Since then she has released 3 singles, Starlight, On the Road and