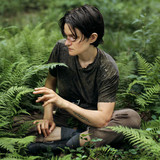 "songs" and "instrumentals" are 2 distinct collections, both written & recorded in April after Big Thief’s March tour was abruptly cut short due to coronavirus. After returning to the US from Europe, Lenker decamped to a one-room cabin in the mountains of western Massachusetts. “I grew really connected to the space itself,” says Lenker. “The one-room cabin felt like the inside of an acoustic guitar - it was such a joy to hear the notes reverberate in the space.” With a hankering to capture the feel of the space, Lenker enlisted the help of engineer Philip Weinrobe, gathering a mass of tape machines, a binaural head, and a pile of XLR cables. After almost 3 weeks of setup and troubleshooting, the studio finally was operating – although the only functioning tape recorder the duo had was Phil’s battery-powered Sony Walkman. Although at peace with the idea that they might just be recording the whole record on cassette tape, a friend was able to dig an Otari 8 Track out of storage and deliver to the pair right before they’d lost all hope. 9 of these songs were written freshly during the recording session. Lenker and Weinrobe began & closed each day with an improvised acoustic guitar instrumental, later making a collage of their favorite pieces, which became the first side of the instrumentals album. “We wanted to make a record that put you, the listener, in the most intimate position possible,” explains Weinrobe. "songs" and "instrumentals" is out now via 4AD.