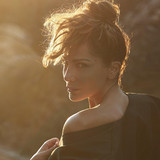 Despina Vandi is one of the most successful and multi-talented showwomen in Greece, with her career transcending the country's borders. Her debut album was Gela Mou, in 1994. In 1997 she began her multi-year collaboration with the songwriter Phoebus giving the public dozens of great hits. All of her albums have been commercially successful, with sales exceeding 1 million copies, multi-platinum, platinum and gold nominations and timeless hits. In 2000 she released Ipofero which became 6 times platinum and was awarded as the most successful single of all time in Greece. At the 2002 World Music Awards, she was awarded as the "Best Selling Greek Artist". Her first three international singles, Gia (2003), Opa Opa (2004) and Come Along Now (2005) entered the charts around the world. "Gia" and "Opa Opa" have both charted on the Billboard. Also, “Gia” reached number 1 at the Club Charts of Music Week in Great Britain and became the number 1 dance song of the year in USA, Germany, Australia, Austria, Brazil, Italy, France, Spain, Turkey, Cyprus, Sweden and Australia. In December 2016 and for two consecutive seasons, Despina Vandi starred in the Greek version of the musical "Mamma Mia!", which surpassed the 300 performances and set a tickets’ record. In the summer of 2019, she starred in another sold old out theatrical success, "To Diko Mas Cinema”. In March 2019, she premiered her own travel TV show, while she was also the presenter of “The X Factor”.