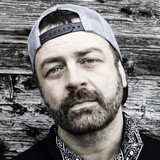 JR Harbidge has certainly arrived with his second album, cementing himself as one of the finest musicians and songwriters to come out of the UK country/americana scene in a very long time. If he wasn’t already on your radar, he certainly should be now.   The country/americana artist hailing from the UK stays true to himself whilst packing the record with plenty of nods to the roots of the country genre. The highly produced record starts with Wrong Side of the Fight, the lead single off the album. The stubborn song focuses on the them of believing you’re in the right just for it to turn out you were wrong all along. JR’s vocals are soft, they have a wispiness to them but still have a strength about them in the opening number. You Saved Me Twice is a real highlight on the album, this is a prime example of Harbidge’s ear for a melodic hook and his ability to take a song somewhere unexpected, giving his songwriting a unique flavour. Meanwhile, the title track which brings the record to a conclusion demonstrates the multi-instrumentalist’s attention to detail when it comes to production and arrangement. The differentiation between each of the sections is so well thought out, allowing each verse and chorus to feel fresh whilst maintaining fairly smooth transitions