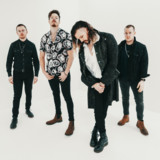 Full bodied, anthemic Alt-rock soaked in hard rock riffs and modern melodies. Late Night Legacy are no strangers to the industry, cutting their teeth by touring and travelling the UK festival and club scene for the past 5 years. The band have made a name for themselves for their signature guitar work, powerful vocals and wild, visually entertaining live shows. Playing Kendal Calling, Camden Rocks and headlining Monmouth Festival Wales to a crowd of over 8000 was just the beginning. They've also supported Reef & Duran Duran at First Direct Arena and continuously sell out their own headline shows in the Leeds & Yorkshire area. When asked about their new single 'Dreams of You' Late Night Legacy stated: “In such a lonely and disconnected Britain, ‘Dreams of You’ relates to how difficult isolation can be and how we all miss the connection of others. We’ve all experienced strange dreams during lockdown and sometimes our dream-state can actually be a very welcome escape from reality." Their previous single 'BLAME'

sold out in HMV on day one and is currently well on the way to 90,000 streams! With support from multiple BBC Introducing shows across the country and named “Ones to Watch’ by BBC Introducing Cumbria, the band were awarded best band of Wigan Live Festival and voted Artist of the week by Richer Sounds. Taking their cues from the likes of