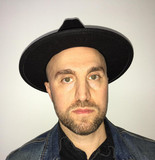 Jim Wolf is an American singer-songwriter who was born and raised in Connecticut. Wolf has broadly toured the United States and parts of Asia, and is best known for his 2012 single, Make You My Lady, which has achieved great commercial success in South Korea. Wolf moved to Brooklyn, New York in early 2008 when he wrote then recorded Make You My Lady as part of an EP called Strange, Weird, and Romantic, Pt. 1. After it’s 2012 release, Wolf toured the U.S., but saw no major commercial success for the album until the song hit the charts in South Korea, nearly two years later until now, where the song remains on the charts for the last 7 years. Other Jim Wolf songs have charted as well, including Another Lover,

Turn This World Around, and Forever Sunday. Make You My Lady has also aired in over 30 TV shows, mostly popular K-dramas including My Secret Romance following it’s usage during a celebrity couple’s wedding. Wolf has a brand new album titled 'Strange, Weird, and Romantic (Part 3)’ the final installment for his series ’Strange, Weird, and Romantic’ series will be available on May 10th 2021. The single, 'I'm Here For You” will be appearing in South Korean drama on May 8th titled "So I Married The Anti-Fan” (Episodes 4) and on June 4th (Episode 11). Four other songs by Wolf will also be featured in the series as well. Make You My Lady has aired on too many TV shows to list here. Go to www.JimWolf.com for TV listing and video clips.