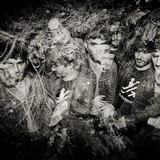 After having released two albums, Belgian based instrumental band Statue are back with their third installment 'Kasper' (produced by Micha Volders). The band, notably known for having four guitar players shocks and awes audiences with their heavy wall of sound. Backed by a tight rhythm section, Statue delivers songs with a keen eye for detail without losing the focus to keep those feet dancing. For fans of: @Battles, @Mogwai, Neu!, Television And So I Watch You From Afar.