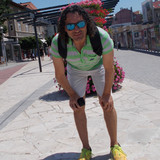 Deyan Angeloff (Nedelchev) - Bulgarian: Деян Неделчев - is a Bulgarian pop singer, showman, and composer. He has issued 12 albums and 9 maxi singles, including projects with his colleagues, some with his brother Boyko. He won the Grand-prix at the Golden Orpheus international festival in 1993 at the contest for new Bulgarian pop songs with the song 'Dedication'. Deyan is the only Bulgarian singer to record an album with Polygram, with whom he had a 3-year contract based in Johannesburg, South Africa. Label site: http://www.orphictone.com/artist_d_angeloff.html