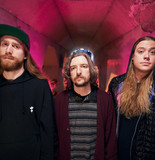 Himiko Cloud is an instrumental band from Wenatchee, Washington featuring Kyle Folden (guitar), Jacob Henson (drums), and Connor McKay (bass). Blending elements of Math Rock, Prog, Post Rock, Metal, and Post-Hardcore the band has coined it’s genre as “Cloud-core”.  Himiko Cloud released their debut full-length album “Telomeres” in June 2021. This is the band's first release as a three-piece since the addition of Connor in October of 2017. Kyle and Jake originally formed “Himiko Cloud” as a two-piece and released the self titled EP in March 2016.  The band is named after what may be the most massive object in the early universe and in the known cosmos! Discovered by a team of Japanese scientists in 2009, who named it after the 3rd century Japanese shaman queen “Himiko”.  “They use loops, polyrhythms, heavy effects, and time signature changes to create a lush form of instrumental progressive music.” -Seaprog (Seaprogfest.org)