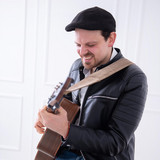 Sébastien started playing guitar at the age of 14 after being lulled by blues, rock and folk during his childhood. It was at 15 that he had his first musical revelation with Stevie Ray Vaughan, who remains to this day his main influence in his approach of sound and groove. The Blues allowed him to discover other traditional roots such as the music of Howlin' Wolf, Elmore James, Muddy Waters and many others. These influences helped him to develop the finger picking technique, a technique that gave him the opportunity to improve his playing, to always privilege the diversification of styles and to try to transmit the soul of a song through the guitar. At the age of 20, he decided to enrich his musical career by studying jazz at the Jazz Studio in Antwerp and at the Maastricht Conservatory, which allowed him to open up his playing and to discover musicians who would have a great influence on him, such as Wes Montgomery, Bill Evans or John Coltrane. In 2016 he releases his first album "Consortium" with several guests such as the guitarists Jacques Stotzem and Guillaume Vierset. In 2018 he forms a duo with the violinist Joachim Iannello, with whom he maintains a beautiful musical complicity based on improvisation and the diversity of styles. In 2019 he releases his second album "Grandma'z Downtown" in the style he calls "Blue Funk" with his quartet formula composed by Antoine Dawans, Jean Derby and Lionel Aquilina.