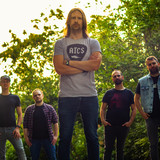 REESE are an energetic and melodic alternative rock band formed in 2010 in Vicenza, a small town in Northeastern Italy. In their early years they self-released two demos ("Just Human Words" and "View From The Tree") and an EP ("Under The Carpet", 2013). In 2014 they won some local band contests playing in Northern Italy and opening for artists of international fame. After a non-stop live activity, the band recorded its first full-lenght album "Black Russian", released on October 27th, 2017, featuring five singles and videoclips. The album was promoted with European gigs in Italy, Germany, Czech Republic, Latvia, Lithuania. In 2019 the band recorded its second album, an 11-track work which had to be out in 2020. However, the release date was postponed to Autumn 2021 due to the pandemic. Meanwhile, the band released a few singles from the upcoming album (Apnea, Dreaming Pieces, Too Many Things, Mirror Of Weakness). LINEUP Carlo Sturati (vocals, guitar) Ettore "Bob" Duliman (keyboards) Matteo "Matt" Castegnaro (bass) Enrico "Greg" Gregori (drums) Tomaso Ziglio (lead guitar)