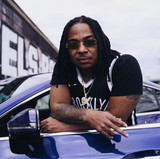 Marz Money was born & raised in Flatbush Brooklyn, NY. Due to the areas heavy Caribbean culture, naturally he became a fan of rap & reggae music. In his late teens, he decided to try his own skills on the mic alongside his friends, creating the hip hop collective Noxmen Committee. What stands out when listening to Marz Money is how accurately the events of his life is expressed in his music. The rapper has mastered the art of implementing wordplay and punchlines in what people call "Reality Raps". Through this career Marz has taken a DIY approach to cut expenses and became a self taught graphic designer. Doing all of the artwork for his rap group eventually led to him doing art for other up & coming artists. This opened up a profitable career path for him. All sorts of opportunities were presenting itself for the mogul in the making, collaborating with notable MC's Nipsey Hussle, Cory Gunz, Sha Stimuli & producers AraabMuzik, GQ Beats and Teddy Da Don respectively. But in April of 2011 things took a turn for the worst when art began to imitate life and Marz was convicted of gun possession & sentenced to an 8 year bid. During his incarceration Marz Money came to the realization that to make it in this game, you have to separate real life from entertainment. In August of 2017, Marz Money came home, ahead of schedule, on work release with a mission.

With his ordeal behind him Marz Money is ready to reintroduce himself to the arts & entertainment world.