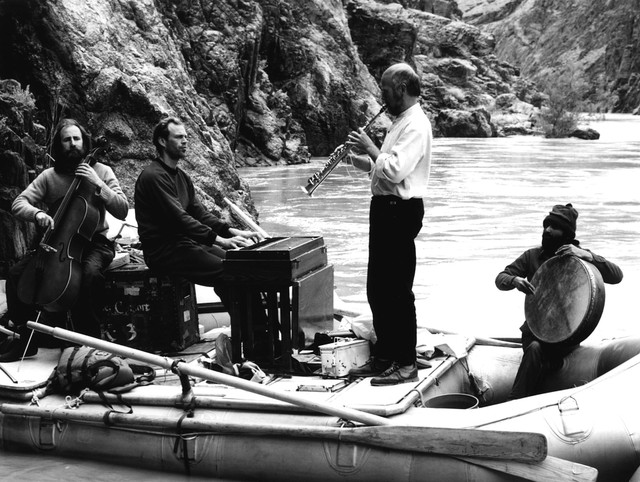 Winter first came to public prominence in 1961 as the winner of a collegiate jazz festival held at Notre Dame University; one of that event's judges, John Hammond, subsequently signed the group to a Columbia recording contract. In 1962, the band was sent on a State Department tour of Latin America. That venture planted the first seeds of change in Winter's concept. In 1967, he abandoned traditional jazz format in favor of a lineup that featured non-Western instruments. The Paul Winter Consort, as the band was renamed, became one of the earliest exponents of world music, combining elements from various African, Asian, and South American cultures with jazz. Members of the Consort interested in extending the music's experimental component -- guitarist Ralph Towner, oboist Paul McCandless, sitarist and percussionist Collin Walcott -- broke away from Winter's leadership in the early '70s to form the group Oregon. Meanwhile, Winter became increasingly involved with environmental issues. He participated in activities with the Greenpeace organization, and worked towards a successful integration of music and nature. Winter recorded his attempts at communication with whales off the coast of California, and used the tapes as the foundation of his 1977 album, Common Ground. Since 1980, Winter has headed a non-profit group dedicated to increasing public awareness of music's relationship to spiritual and environmental health. He continues to perform in support of his organization, frequently in settings conducive to the production of (and interaction with) ambient sound, such as the Grand Canyon, or New York's Cathedral of St. John the Divine; in 1998, he also teamed with Oscar Castro-Neves to record Brazilian Days. Celtic Solstice followed a year later; Journey with the Sun appeared in early 2001. ~ Chris Kelsey, Rovi