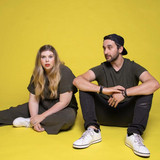 Myra Gleason, Stereo RV’s lead singer, has one of the most powerfully expressive voices you’ve ever heard. Her fervent vocals are backed by the guitar and extraordinary beatboxing abilities of her husband, Gabe. Hailing from Portland, OR, the married duo currently live in Sacramento, CA. They released their debut EP Human in early 2017 , Myra’s true to life lyrics, inspired in part by her work with children in the foster care system, showcased the vulnerability and emotional depth that’s often missing in pop music. For the past two years, the road has been Stereo RV’s home. Playing on stages in living rooms, secret shows, Sofar Sounds, and intimate listening rooms. Their live performances offer the rare gift of cultivating a time of authentic connection. While the pandemic forced many artists to navigate and evolve, they have found success with their music being featured on a number of hit TV shows including “All American,” “DC Legends,” “Shameless,” “The Good Doctor,” as well as trailers for ABC and Amazon ad space. With a fresh approach, the duo have embarked on a new era, turning the page from Stereo RV and ushering in Gleeson . While staying true to the feel good elements of their music, they are branching out and adding a little more soul. You can find GLEESON (formerly known as Stereo RV) wherever you engage on social platforms and streaming services.