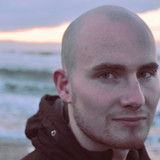 Dunluvly's Website: https://dunluvly.com/ "You’ve got that beautiful fingerpicked guitar, so obviously rooted in the world of folk music, working in tandem with a driving dance-like beat. It makes for quite an uplifting listening experience. And, there’s a real sun kissed nostalgia and vibe about the whole thing."

The AU Review "Dunluvly released a compulsively listenable, Ben Howard-esque tune, called 'Too Late', on September 25. Blending indie rock with a dance-like beat,' (that is) 'hallmarked by rhythmic guitars, layered harmonies and strings, as well as Dunluvly’s signature sonic textures." - Hot Press Magazine "While showcasing strong songwriting throughout his work, his emotive vocals and skilful performance on a multitude of instruments create unique textures in his music." - IMRO "The multitude of textures created through looped guitar and meticulous attention to detail showcase just how talented Dunluvly is as an artist." - Indie Buddie Currently based out of Waterford, Dunluvly is a multi-instrumentalist and producer born and raised in Dublin, Ireland. With roots in Traditional Irish Music, Hip-Hop and Psychedelic Indie his sound is often described as a sonically rich experience. From nostalgic camping trips with friends to the gritty suburban experience of being raised in Firhouse, Dunluvly hosts themes that invoke sentimentality in anyone that listens to his signature Bedroom Pop sound.