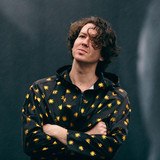 Jack Spider is a solo project based out of Brisbane, Australia. He is a multi-instrumentalist, singer-songwriter with a shambolic style that is equal parts bizarre and beautiful. Jack has a decade-long history of playing as a member of many seminal Brisbane bands such as Babaganouj, Blonde Tongues & Inland Sea, and this project sees his song writing prowess centre-stage with influences from Pavement, Beck, & Kylie Minogue. In 2018, he released his debut ep, “Animal Café” and played alongside excellent acts such as San Mei, East Brunswick All Girls Choir, Ben Salter and ended this run in 2019 by performing as a part of the Mountain Goat Valley Music Crawl festival. 2020 will see Jack Spider release his new EP “The year I spent as a Goth Tennis player” on June 12th. This new EP focuses on time old themes of loss and love, coupled with his personal struggles with mental illness, and navigating life in an internet age.