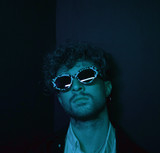 Kapes, artist name of Fabio Caposano, began his career as a DJ / producer in September 2010. His first progressive-house influences, inspired by the “Swedish touch”, bring him today to his current sound, a mix of house music with electro influences up to darker electronic tracks. Among his first productions stand out the remix of the song "Stay The Night" by Zedd, supported by Marco V, Dj Bl3nd; the remix of "Poison" by Martin Garrix, played in the monthly podcast of DJ Juicy M; "Python”, a track released on the Dutch label "Musical Madness" by Marcel Woods, played among others by Ummet Ozcan in his radioshow, and the remix of the track "Love" by MORTEN, played and supported by the Danish DJ himself, as well as by Dj Bl3nd, Djs From Mars and others. Today his sound has led him to release many tracks on Strakton Records, a label based in London, collaborating with artists of the same label such as Joseph, from which songs like "Roses" and "Daisy" were born, with current UK radio sounds, and that have reached thousands of streams on Spotify. Cited by the well-known Italian magazine of the sector "Dj Mag" for his song "Metropolis", Kapes is also part of the Guerilla Crew Records family, where he releases more dark and strong tracks. " We are only at the beginning, I’m looking for much more. I want my music works for festivals, for clubs, for radio, for cars or any other place or situation. There’s no limit to own’s inspiration "