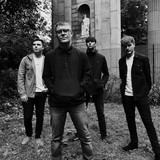 Channelling South Yorkshire grit and a passion for north west guitar music, The Outcharms represent the best of both sides of the Pennines. The band began in Doncaster in 2014, and in 7 years they have worked their way up from support slots to headlining and selling out The Leopard in their hometown twice, as well as the Foundry and the Leadmill in Sheffield. Their 10-song catalogue on Spotify has amassed over 950,000 combined streams, with their highest-streamed single '(Who's Making You) Smile?' recently receiving a play on Steve Lamacq's BBC Radio 6 Recommends show. The Outcharms played their first out-of-town headline in Manchester at Gullivers in October 2021 and sold it out 5 months in advance, showing the demand for tickets to see them after the pandemic is at an all-time high. The band are sure to create chaotic atmospheres and make their live shows unforgettable nights out, with the band recently selling over 400 tickets at their biggest headline yet at the Sheffield O2 Academy2. UTC x