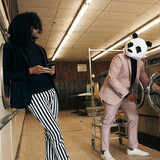 Every PANDA$ song is an escape into another world, an alternate reality that’s more dreamlike and bizarre than everyday life. With their sound shaped by everything from trap and old-school hip-hop to ’60s soul and classic pop, the L.A.based duo, comprised of Manny and Landa, transforms each track into a movie with their music acting as the soundtrack. Their debut single “PARI$,” featuring Toronto based rapper Jute$, is accompanied by a video that was shot on their iPhones, aptly turning “PARI$” into a Snapchat story come to life. “PARI$” flawlessly captures the bittersweet sting of regret, what Manny describes as “the curse of man: always thinking you’re going to find something better than what you have.” Formed in New York in 2016, PANDA$ began when Manny “decided to lock myself in a room and just vibe ’cause I felt like I had so much left to say.” After having surgery on his vocal chords that could have possibly ended his career &amp; ability to sing, Manny felt like this was his second chance. Ultimately the music they created was meant to serve a greater purpose: giving each listener a deeper sense of what’s possible in their own world. Early on in their partnership, the duo discovered an uncanny balance between Landa’s endlessly experimental mode of production and Manny’s more classic sensibilities (“Frank Sinatra’s my dude,” he says. “I love how his music transcends time”). That push-and-pull gives each song a powerful energy, fueled by their unlikely chemistry as creators.