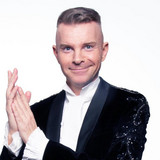 Páll Óskar Hjálmtýsson (Paul Oscar) is a true Icelandic icon if there ever was one. He has been one of Iceland’s most loved and respected popstars of the last three decades.

He is also an outspoken gay activist. Páll Óskar (born march 16th 1970) is one of the few icelandic singers who is capable of performing big ballads as well as belting out dance anthems simultaniously. His breakthrough came in 1991, when he gave his interpretation of Dr. Frank-n-Furter in the Rocky Horror Show, then performed in icelandic for the first time by the theatre company of collage Menntaskólinn í Hamrahlíð. During the nineties, Paul enjoyed singing with two different cover bands, releasing "Milljón á mann" ('94) with The Millionaires, and "Stereo" ('98) with Casino. He was Iceland's representative in the Eurovision Song Contest 1997, singing his own composition "Minn Hinsti Dans". His solo albums are Stuð ('93) Palli ('95) Seif ('96) Deep Inside (´99) and Allt fyrir ástina (´07). His dance pop album „Allt fyrir ástina“ (2007) proved to be a massive hit and his greatest critical and commercial success.