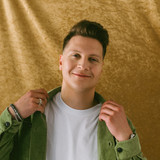 Since making his debut in 2015, artist and producer Matoma has risen from a bedroom producer posting on SoundCloud to one of dance music’s biggest stars. Between his solo tracks, two albums and collabs with everyone from Dua Lipa to Snoop Dogg, the Norwegian artist amassed a staggering 2 billion + streams. With this new chapter in his career Matoma brings songs with the energy, irresistible melodies, and relatable stories that can get a party pumping, motivate your morning, or bring solace to sadness - cutting across genres but always connected by a sense of feelgood, everything-is-possible positivity. A sound that is flavoured with vintage synths and the warmth of live instrumentation from local musicians. It’s also the result of now having the creative freedom to release his music independently. Matoma’s music is a very natural extension of the man himself: the sonic equivalent to his beaming, beatific smile and constant quest to find ways to make a positive impact upon the world. Or, as he smiles, “This music is as close to who I am as you get.”