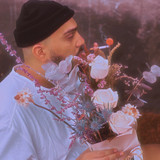 Gabriel Nobrega, also known as Frank Lucas, was born in Puerto La Cruz, Venezuela, city where he currently resides. He discovered music at an early age, age when he became a member of his elementary school choir. In the meantime, he was being influenced by the sounds of Barry White, Janis Joplin and Selena Quintanilla thanks to his parents.   At the same age, he discovered his love for Hip Hop when a friend gave him De La Soul's album: The Grind Date. He later started getting close to urban genres with artists such as Tego Calderon, Don Omar and Daddy Yankee.   He formally started his journey within the urban movement in 2018 with his first EP: Yulaida, characterized mostly by G-Funk and its peculiar rapping style. He later joined the "Piso 8" collective along with Veztalone, Tayko, Hocho and other artists. Meanwhile, alongside Irepelusa and Veztalone, he created a band format project called Motherflowers. As of today, Frank Lucas is actively involved in both of these projects.