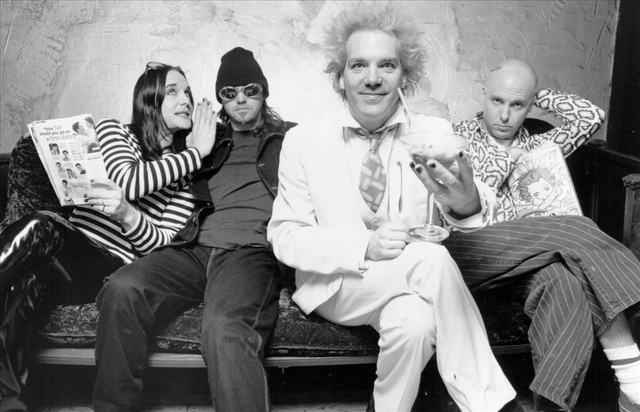 Flipp is the bizarre brainchild borne of schizo singer Bryan Arens and drummer Kilo Bale when the pair made an impromptu video of the Who's perennial "My Generation" that accidentally received a huge reaction. Brother and multi-instrumentalist Chia Karaoke Arens and bassist Freaky Useless joined the resulting ride, and the quartet honed their riotous stage act which consisted of (but not limited to) dumping Flipp cereal on the audience and pulling unsuspecting onlookers onstage to perform. In 1997, Flipp released their eponymous debut on tax day, April 15, and celebrated by performing in front of the Minneapolis Post Office until the police arrived. The quartet escaped and went on to become Minnesota celebrities. Then Flipp crossed America with Cheap Trick: allegedly, after one show, Trick guitarist Rick Nielsen asked Arens, "Did I get onstage with you?" Arens replied, "Yeah. We were playing 'Magical Mystery Tour' and you played 'Day Tripper.'" Flipp began Teenage Rampage, a contest for Minnesota high school bands. They played Woodstock 99 and performed in the exploitation eye-sore Terror Firmer. Now under the auspices of Bill Aucoin, who managed Kiss and Billy Idol, Flipp dropped their second recording, Blow It Out Your Ass, in 2000. The official Flipp website is www.flippcentral.com. ~ Doug Stone, Rovi