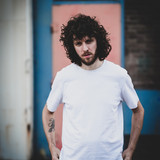 De Kraken, Willem van Rij’s creative alias, started in the 90’s as a little boy with a fat equalizer, always busy with knobs and freaking frequencies.

When he grew older the love for vinyl took over and he started producing and collecting rave rarities. In 2016 he earned himself his first releases. To find his sound he first had to be thrown back to the most fundamental aspects of life. Two years of combining dreamy soundscapes, autobiographic stories and heavy bass-lines turned out to his first album 'Two Crosses' (2019) which is about the aftermath of death. The album could be read as a diary with shreds of memories from a mainly hazy time in which he lost his best friend and himself at the same time. He now is building on this sound that evolved into emotive and cinematic panorama's. Melancholic and deep but with a dash of rave.