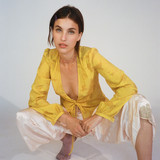 Rainsford has shown her impressive versatility across a genre of projects rooted in film, television, and music. Multi-hyphenate in every sense, she’s a musician, actress, model, writer & creative director.

Hailed by Paper Magazine as “the minimalist weirdo-pop star of your dreams,” Rainey has also carved out her own place amongst the musical landscape. Performing under her full name, Rainsford, she has topped a variety of Ones to Watch lists and garnered notice from the likes of Billboard, Complex and Noisey. She released her critically-acclaimed EP “Emotional Support Animal” in 2018 which she then toured behind throughout the US and England, ending with a sold out show in London. Captivating & growing fan base both in the US and overseas, Rainsford earned the endorsement of both press and fans in between her entrancing live shows and must watch music videos, firmly securing her as a unique emerging voice in pop and reaping over five million streams all as an independent artist. Her influences range from indie, pop, R&B and soul and share the qualities that are most evident in her own material – honesty and authenticity. Rainsford’s latest tracks “Crying In The Mirror” and “2 Cents” follow the release of the intimate “Open Open” late last year and are the first of six tracks to be released this year.