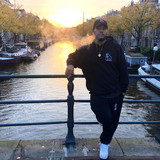 Jesse Calosso spent the early years of his life in the Bronx. The bustling streets would always brim with many musical forms, from hip hop to reggaeton, house to salsa. Endlessly diverse and rich with culture and colour, those early experiences made an indelible mark which means that today, Calosso is stylistically impossible to pin down. He can do Chicago tinged house, driving techno drums and everything in between, all tied together with his love of dangerously infectious basslines. This diversity of sound and an unrestricted approach in the studio has quickly lead Calosso to the top. Always keeping an open mind when recording, he begins with impromptu jams and goes wherever the music takes him. "I like to try and keep an open mind when it comes to music," says the now Miami based Calosso, who came up with close-knit New York City peers like The Martinez Brothers. As adept at crafting sleek minimal grooves as he is serving up soulful house or cooking up disco flecked bombs, he admits his aim is always to be as versatile as possible. Jesse has achieved a huge amount for such a young artist, but his hunger remains. He is as keen as ever to learn new instruments, pick up new skills and to continue to challenge himself on a daily basis. That means you can always expect a steady stream of new music, but also his own brand new label which is sure to be another hard to define but impossible to ignore platform that continues to keep Calosso at the top of his game.