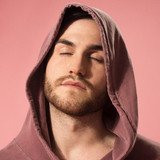 You don’t know me. Based out of his bedroom in Chicago, Kyzr Blue is the moniker for artist, singer, and self-taught music producer, Michael LaVallee. His genre style lies somewhere between electronic, house and pop, but he prefers to call it “something blue you can dance to.” Even though new to the music scene, he has a promising ear , flare for details and a sound unlike many others. From his upcoming EP, Kyzr Blue’s debut single, “Lose My Mind” is a dark and powerful anthem of lust while his second single, “Time Between the Cuts,” paints a melancholy story of a broken heart. Both can be found on his upcoming EP titled, “His Name Was Mine,” coming soon.