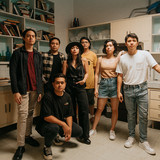 Cheats formed in 2013 from the core duo of longtime bandmates Jim Bacarro and Manny Tanglao, initially recruiting a loose collective of musicians to collaborate on their original material. Eventually, a more-or-less stable lineup coalesced around them, including singers Saab Magalona and Candy Gamos, who added a feminine dynamic to their music, and the band played their first shows, generating buzz with every live outing. The band released its self-titled debut album in 2015, produced by scene veteran Ely Buendia. This was followed by invitations to play several festivals in 2016, including Singapore’s Laneway Festival in January, opening for Beach House, CHVRCHES, The 1975, and more. Cheats also shared the stage with the likes of Bon Iver and Death Cab for Cutie at that year’s Wanderland Festival in March, and with Kanye West and Wiz Khalifa at the Paradise International Music Festival in April. Armed with a new set of tunes, Cheats reentered the studio in 2017 with producer Raimund Marasigan and recorded their second full-length, Before the Babies. In 2019, the band released a succession of well-received singles on Spotify, including “Milk,” “These Kids are Only Dreaming,” and “Machine Jr,” collectively known as the Ultramilk EP. In 2021, Cheats finally returned to the studio with producer Mikey Amistoso to track their next releases since 2020’s interim single “Daze” and last February’s video single “Tawid,” their first Filipino-language track.