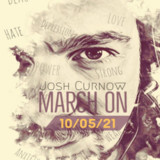 New single “MARCH ON” out now!   Unsigned singer song writer Josh Curnow is a 32 year old, full time, multi talented musician, from Cornwall.   At 18, Josh worked full time behind a bar where he would often entertain the likes of WW2 vets and fellow folk that would come in on a Thursday for there “pensioners lunch”. After a birthday party was nearly ruined on Josh’s shift due to the entertainment pulling out, Josh found some one else to pull the pints while he picked up his guitar and pulled off a gig that would go onto to change his life! Over 1,500 gigs later, a semi finalist on one of the worlds biggest talent competitions, 2 EP’s, the releases of his debut album “RISE”, TV/radio appearances and lending his talents to play an intimate gig at “GLASTONBURY FESTIVAL” in 2019.   “The year of Corona”   March 2020 started with Josh being invited out to play 8 gigs in Califonia. As a born again Christian, Josh played several faith led concerts at Calvary Chapel Costa Mesa, also known as “The Home Of Worship” where he teamed up with a band to bring an electrifying performance and share the stage with guest speaker and American baseball legend “Darryl Strawberry”. Wearing mask and leaving the states via LA Airport, Josh landed in a very different UK. The rest of the year is history, but was booked solid with weddings, Festivals and shows similar all around the world.   Contact: www.JoshCurnowMusic.com JoshCurnowMusic@Gmail.com Facebook.com/JoshCurnowMusic