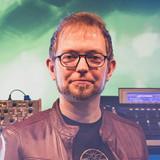 Kebu (alias Sebastian Teir) from Finland is a bright comet in the world of synthesizer music, who was awarded "Best Artist" in the German Schallwelle Music Awards in 2018. Kebu creates instrumental, melodic synthesizer music, influenced by the kind that was made in the 70's and 80's. His latest album "Perplexagon" debuted as number 6 on the Finnish album charts. Kebu's music is distinguished not only by a dedicated treatment of analogue synthesis but also of an audience-captivating live performance. His concerts radiate warmth and joy and show off a huge arsenal of analogue synths, which brings to mind the best solo synthesizer artists from the 1970's and 1980's. Indeed, Swedish Gaffa.se said in a rave review of one of Kebu's gig that "Jarre's successor has arrived".