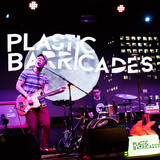 NEW ALBUM "Self-Theories" OUT NOW! TRIPPY MUSIC VIDEOS ON YOUTUBE! "Self-Theories" is an album about despair and hope, anxiety and optimism, lack of self-esteem and active search for it, maladies of the modern world, our responsibilities and reinventing ourselves for the sake of a brighter future. - 12-track LP was written and recorded in a backyard shed in North-West London, mixed by Paul Love in London and Paris and mastered by Andy Baldwin at Metropolis Studios in London. - Three singles have truly DIY music videos. “Tunnel” was filmed using a digital microscope, “Optimist” had a cast of 300+ in a fish tank and “One for the Road” used vintage road trip footage from the 50-s. - Artwork for the album and singles was created by Elina Pasok. “When your world is turning upside down - step outside, change your perspective and have a look from a distance.” Romantic and honest, gloomy and curious, melodic and melancholic, Plastic Barricades chronicle life in the troubled yet fascinating XXI century, asking questions and trying to find answers. Inspired and influenced by almighty Radiohead, Foo Fighters, Oasis, Coldplay, Muse, Death Cab for Cutie, Placebo, Nirvana and many others, the band loves to experiment with styles, sound and approach. Floating between London and Paris, Plastic Barricades are Dan Kert on guitar, keyboards and vocals and Paul Love on drums. Debut LP "Mechanics Of Life" was released in September 2017.